Got the anchor desk hauled into the studio this weekend (love you Ron and Lexi for working in 100+ degree heat to haul that monolith) and went in this morning to snap some shots.

If you want a closer view, just click on the individual photos.

View from control room to studio 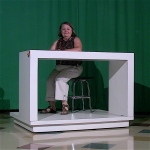 Hole in the wall!!

Word of explanation – for the past three years I’ve taught broadcasting in “almost a studio.” It had the configuration, but I was also teaching English – which mean more than half of the room had desks, blocking off any ability to really do studio work. This year my English class is moving to another room, so the studio for the first time is dedicated to what it was meant for.

This past year the light grid was installed – and there it sat. I don’t have a variety of lights – just three 1K Arris, two of which were mounted by Theater Manager Brian Harrower last week. Big improvement – we can use the controls to light up and dim down AND no more potential disasters waiting to happen with power cords running all over the room.

My buddy Kathy Newell pointed out that TV station controls rooms do NOT look out over the studio…many times they are located elsewhere in the building. The response is – hey, I’m a teacher and have to maintain a visual on the kids. Besides, it kinda looks neat.

The anchor desk – formerly known as a store fixture – bought from the local Gottshalks, which is going out of business. Five by five foot platform with a four foot high desk. Just enough room for two anchors. It will be painted (most likely a neutral grey) before school starts. Oh – it has wheels, so we can roll it to any location we want in studio.

The hole in the wall!! I’m still excited about it. Just some corrogated plastic pipe and a couple of toilet mount fixtures. About five inches wide (I think). Mounted right below my monitors in the control room.

And the student comments and 48HFP (48 Hour Film Project) musings on the board…this is what happens when students are no longer learners but part of a team under deadline. I didn’t even really see these until I returned to the classroom the Monday after the event. Made me want to cry….

3 thoughts on “And here’s what the studio looks like!”