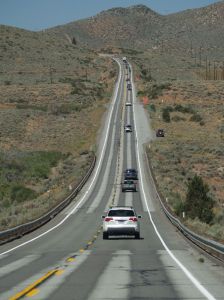 The road...and the questions...go on forever.

I never could understand folks who turn their brains to the “off” position. I do understand why my mother made the comment as she lay dying that she couldn’t stop thinking. A brain is meant to be used…and hers was there til the end. Now that doesn’t mean you’re supposed to be in overdrive solving the problems of the world in between meal planning and working on your Pulitzer-winning novel. To me, using the brain means applying it to problems and asking questions.

The impetus for this column? Questions that arise on a road trip. Road warrior questions. Very random questions that ease into your mind and then suddenly stick there and you can’t make them disappear. Kind of like a song that keeps playing back again and again.

The road trip Kathy Newell and I took featured some real doozies, listed below. Some were easy to find answers to while others are still sitting there, partially reasoned out in our minds but definitely not finally and absolutely answered.

So here are the questions…answers and photos to be posted at some point in time.

Number One: Why are some bales of hay round and others angular/rectangular. With one exception (in my limited knowledge) in California, they are all rectangular. There’s a field on the east side of the Altamont Pass just west of Tracy that had large round bales. Caught my interest, but on this road trip we were seeing round bales everywhere. We became obsessed with them. My brother-in-law said it’s because round baling is less expensive…expecially when you consider cost of baling equipment. They are a pain to haul…you need specialized gear to pick and carry them. Newell’s brother said round baling is done if you don’t plan to transport bales a distance and they are easier to break apart to feed animals.

Number Two: How are mountains created?
(We answered this one with a quick Google search…basically five ways.

Volcanic activity – easy to understand. The earth spews out hot lava and materials and they build up to build mountains.
Folding – new to me. Pressure on earth’s layers causes them to fold or undulate.
Faulting – faulting caused the familiar Sierra Nevada range and the Grand Tetons. Pressure builds in layers of earth but rather than folding the separate plates shove against each other and one goes up while the other goes under. The uplifted plates are mountains.
Dome building – another new one…when pressure builds, rather than folding or faulting, a dome is created. Check out the Black Hills in the Dakotas.
Erosion – wind and water wear down what might have been a plateau so that instead of a mountain being built up…the land around it is worn down.

Number Three was a Newell questions: Why are the power lines different in each state different?

(still working on that one) Kathy and her brother surmised that it was a combination of available materials and the weather elements the power poles are exposed to.

My question was Number Four: Why are there so few veggie gardens in farming areas in Idaho and Wyoming? At least from what we could see cruising by. Someone out there help me. We’re talking open country in the middle of summer and I only saw two or three the entire trip.

Number Five – Why does man harness and sanitize nature to the extreme? Point in question: Lava Hot Springs, Idaho has some historic hot springs that were held sacred and used by the native Americans.

Used for decades by folks traveling specifically to the town to “take the waters.” Now those miracles of natures have been tamed and piped and you can enjoy them in concrete pools. Why bother? Why not just pipe regular city water into the pools? (The original hot springs are hidden behind a metal gate nearby….and local kids, who don’t see the sense in paying good money for a local attraction, take to the creek that runs through town and ride it down to where hot water meets cool for a refreshing treat.)

Oh yeah – that last one was a rhetorical question. Don’t know if there is a factual answer.

Number Six: Do we really have so little time that we now engage in “flash” memories. Not memories built up in time, but grabbed on the run. I took a lunch break after dropping Newell off at her brothers and pulled over to enjoy a view of the Grand Tetons. Was only there about 35-45 minutes and people watched. I must have seen a dozen folks pull up and either just look or lean out the window, shoot a snapshot and leave. Maybe half a dozen got out for a more leisurely five or ten minute look. Not enough time to sit…watch shadows move and cloud patterns pass over. Fast memories are like fast food. Nice while you have them…but they don’t sink deep into the soul like a real memory. (OK – make me guilty with the rest of them.)

Why did it rain when Newell was driving and not when I was behind the wheel?
Her answer: “Cause I drive in the afternoon and you do the mornings. Clouds and storms build and then dump rain in the afternoon.”
Good enough for me for now…

…and now on to the lesson/tie-in with videojournalism. If you don’t ask questions, you don’t get answers. An answer you come up with is only a guess. At best, an educated guess. Research and asking experts questions are what get you answers. YOU DON”T KNOW IT ALL.

(heck, I only know part of it all)

One thought on “Road Warrior Questions…”