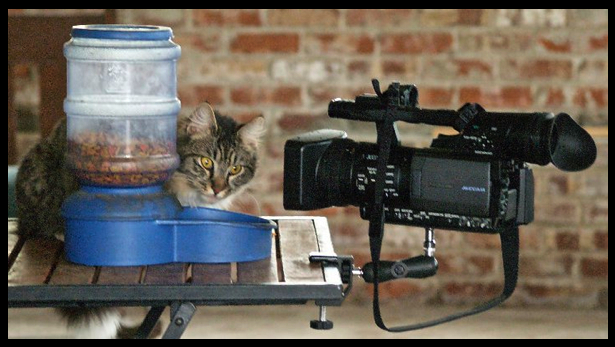 New toys are always fun…even more so when someone you know invented them AND you get to be one of the first to play with them.

So what is this new toy?

It is the Press Grip – the brainchild of KGO cameraman Dean Smith. He’s a regular guy…and in and out of the many press conferences that are part of every news photographers stock in trade. One of the problems encountered at PCs are overcrowded podiums, tables, mike stands…so Dean came up with a handy do-it-all clamp-on solution.

I got my cash in fast when he announced they were for up for grabs…and got one of the first off his (very personal) assembly line. So let’s take a look, break it down, and see what it can do.

Essentially the Press Grip is a vise grip with ball and socket to allow rotation of the microphone or camera to level it and/or aim it in the right direction.

The beauty of it is in the construction and quality of materials. It has the vise to grip the table/podium/fence post/window…and then two ball socket connectors that allow you to position your camera or mike in almost any position. You can go up…down…sideways…even upside down if you’re so inclined.

I immediately put my Panasonic HMC150 on it and ran around scaring the livestock (see photo top of posting as Shim barely manages to conceal his excitement). The 150 weights in at just over five pounds…I added on weight and am confident (don’t quote me on this though) that it will probably hold up to six pounds and still have some give and take room. 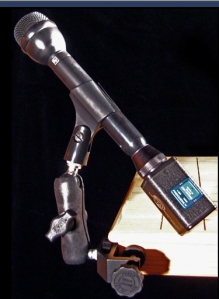 What works? The ability to fix your gear where you want and aim it where you want. While it is not a quick snap-on solution (does take a minute to screw in place), it is most definitely a solid solution. Once you’ve got it in place, it stays.

I’ve been in situations where mikes were piled high and deep and duct-taped into unbelievable masses of chaos, so entangled that it was nigh impossible to extricate your mike from the mob. Assuming no one attempts to mount/duct-tape their mike to yours, this will allow you to stand free of the crowd, ready to rip and run.

While I think up unusual and creative ways to use the Press Grip, you can be sure it works in a media frenzy environment…since Dean has field tested this at work in San Francisco before putting it up for grabs.

Details: The Press Grip, created by Dean Smith can be found at this site for $55.00 plus shipping.

(Transparency: yes, I know Dean Smith, the creator of the PressGrip and yes, I have given him permission to use my photos and endorsement in promoting his invention. And no – I did NOT receive a free PressGrip. Had to pay for it along with everyone else…although Dean does keep sending me improvements as he finds ways to make his product even better.)

Addendum May 8, 2011
Last night I shot a fashion show for a former student, now attending San Joaquin Delta College. I set up two lock-down cameras and roamed the floor with my Panasonic. One camera went lock-down on a tripod to shoot the main staging area…but I needed a high and wide view also. That’s where the Press Grip came in handy…I attached it to a ceiling fixture upside down, put my HV20 onboard, adjusted so it was upright and covering probably 2/3 of the room and let ‘er roll. With the wide angle adapter, I got it all. Added benefit – high and secure enough that it was out of the way of walk-bys and possible folks with sticky fingers (hardy in this crowd though).